Sprint was the first wireless carrier in the U.S. to offer a 4G service, but Verizon and AT&T are all set to launch theirs. There are still a number of cell phone users who are still unsure what it all means to them, so we thought we would offer some insight into the 4G network, which some know as LTE.

Blast Magazine said that it was yesterday when AT&T updated their website to inform customers that 4G was coming, but has yet to offer a going live date. We do wonder how the carrier promises such fast speeds, when they have even struggled to offer 3G to its customers? Having said that, as with most wireless carriers, the fast 4G service will only be available in a select number of locations to start. 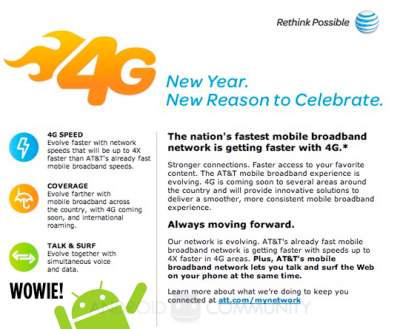 According to Android Community, AT&T sent out an email to customers explaining what handsets will support the new 4G technology; they are as follows: the HTC Inspire 4G, Motorola ATRIX 4G and the Samsung Infuse 4G. We discussed two of these in recent articles, as they were seen doing the rounds during CES 2011.

It is ZDNET that offers a great insight into this, not only with the technology used, but how AT&T and T-Mobile announced it during the Consumer Electronics Show, as none of us were expecting it to happen just yet. There had been no rumors; all we knew is that Verizon were way ahead of their rivals.

Currently there are 3 forms of 4G, LTE, WiMax and HSPA+. NPR has been looking into all three and has been discussing how much faster they are than 3G. One thing is certain though; if you live in the UK, do not expect 4G/LTE for some tome to come.