When we first began talking about the ASUS Eee Pad Transformer’s successor we were excited to hear that it would feature one of Nvidia’s Kal-El Tegra 3 processors, well we have just come across some outstanding benchmark results which prove that this tablet is in a league of its own.

Recently an article was posted on tech2.in.com featured an image showing AnTuTu benchmark results, here we get to see the results of lots of Android tablets and smartphones, however everything has been overshadowed by the results which the ASUS Transformer Prime delivered.

The AnTuTu benchmark tests out your Android device’s memory, CPU, 2D / 3D graphics and database IO performance – it also tests out the SD card read / write speeds. In the tests it is clear that the CPU Integer, CPU float-point and RAM performance is head and shoulders above anything we have ever seen before. You can see the benchmark results below. 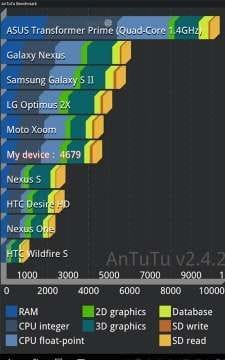 If you look carefully you will see that the Prime reaches AnTuTu’s 10,000 point limit, therefore we can’t be sure just how much higher the score would be if there was no maximum score. What’s interesting is that the Galaxy Nexus and Galaxy S II scored just 6000 in the same test, neither of these devices are considered slow, which means the Transformer Prime is unfathomably fast.

The results also give us some insight as to how much faster the Prime performs when compared to other tablets, the Motorola Xoom and original Transformer score less than 5000 in the benchmark test, however we have to remember that benchmark results do not always equate to real-world performance. That said, we must not forget that this tablet has not even been released yet, therefore new firmware updates may improve things even further.

When previously speaking about the Kal-El platform we heard that it will deliver great performance, and we now have evidence of this, however we have also been promised low power consumption, therefore we can’t wait to see just how much battery life you will get from a single charge.

Do you think that this tablet will set the standard for others to follow?