We are now well into Computex 2011, and as we are starting to get a few ASUS PadFone release details, along with rumors of it coming with Ice Cream Sandwich. It has been rumored for a while now that Android 4.0 will be called this name, and makes sense, as it will be more of a universal mobile OS for use with smartphones and tablets.

Keeping up with the combo idea is the Padfone, as there will be a 4.3-inch smartphone that will dock in the rear of an ASUS tablet device. This is perfect if you have an email or something on your handset but need to view it on something a little larger, which is where the tablet comes in.

Now we have no idea what we can expect spec wise, but we do know that the slate will have a decent battery life, thanks to ASUS putting in an extra cell. The controls are not final yet, but it does give you a good idea of what to expect, but you will notice that there is no rear camera that is down to the docked smartphone to provide this. 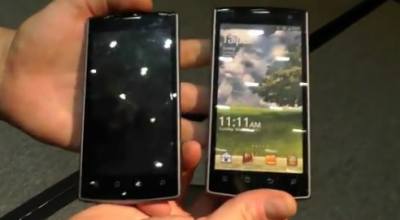 On the bottom of the smartphone you have the standard Android capacitive keys and on the side are the two connectors that connect to the pad, Micro HDMI and Micro USB. There looks to also be room for a Micro-SD Card slot, which will provide extra storage capacity. We are a little concerned that ASUS will stick with a 5-megapixel camera, when rivals are now starting to use 8-megapixel as standard — even Apple is considering this with the next iPhone.

For a greater insight into this latest device from ASUS check out the video below. Latest rumors suggest a release date close to Christmas. Do you think that the PadFone will catch on? Is ASUS now starting to cop Motorola with the Atrix and the Photon?