Aston Martin has been around for 100 years now, and as a way to celebrate this milestone they have come up with the CC100 Speedster Concept. This speedster is said to be a one-off, but we’re told that its specs and design features implies what future Aston Martin models will look like — well a little anyway.

When you stare hard at the CC100 Speedster it’s easy to detect Aston Martin’s vision by looking to the past and the future with this concept, but it’s the famous DBR1 that has the biggest influence with the cars design.

The main Aston Martin CC100 Speedster Concept Specs — Power comes from a naturally aspirated V12 petrol engine, which is the latest generation AM11 powerplant. We’re not certain on horsepower, but we do know the engine will help propel the CC100 Speedster from 0-62 in a shade over 4 seconds and go on to a top speed of 180 mph. The car could keep going, but has been limited, which to us is a shame because it would be nice to see just what this beauty could do. 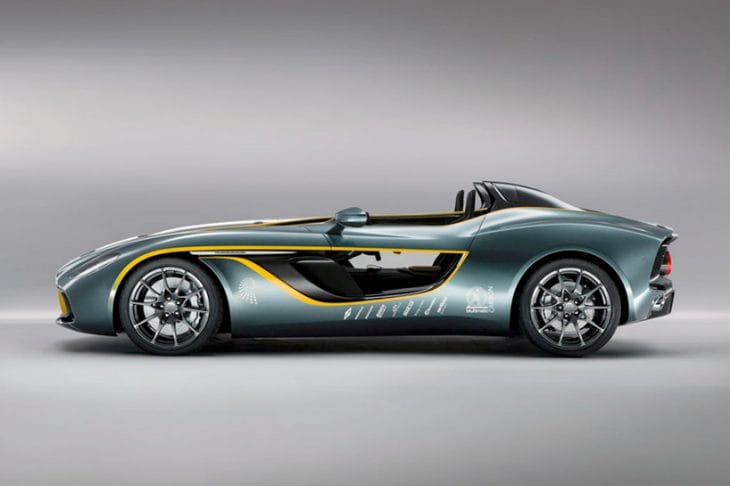 The reason why the car is so fast is thanks to its carbon-fiber body, as well as there not being much of it either. It’s a shame that this will be the only one, but if Aston Martin would be able to replicate just a fraction of this CC100 Speedster Concept onto their next-generation model, then they could be onto a winner. They haven’t produced anything completely new in several years, so let’s hope that an all-new model can come up with the goods.

Check out a video of the Aston Martin CC100 Speedster below, but for a comprehensive look at the concept then you might want to head over to the Aston Martin Website, where you can view the car from all angles, study its design, and look at how it compares to the legendary DBR1.