Now is the time to pick up your Xbox One console if you haven’t already. We already heard that Microsoft would be issuing a $50 discount over the Holiday Season and now we can see that retailers are starting to issue these discounts in their listings.

Better yet, we can see that they apply to bundles as well. We have spotted that on Walmart’s website, you can now pre-order an Assassin’s Creed Unity Xbox One bundle for just $349.99.

While that price is already amazing for a new console that comes with an unreleased AAA game, Ubisoft and Microsoft are even throwing in Assassin’s Creed 4: Black Flag as well. 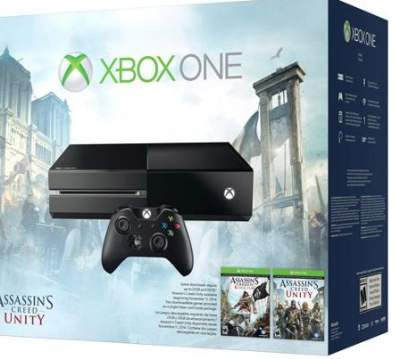 You can still expect to pick up Assassin’s Creed 4 for around $50, so to have it included in this bundle with Unity without any extra fees on top is pretty hard to beat.

As a result, we have a feeling that the Xbox One Assassin’s Creed Unity bundle is going to be in high demand throughout November so you may want to get your order in early.

Just for comparison purposes, Walmart is still selling the Destiny White PS4 bundle for $449.99 which is still a decent offer if you can secure a white console.

In terms of value though, that $349.99 Xbox One bundle is incredible since it comes with two big games. Let us know if you are tempted and if you think Sony needs to lower their prices too to match Microsoft.