It’s somewhat embarrassing too, as only on Tuesday December 16 did Ubisoft state that they were holding back on the Patch 4 rollout as they wanted to tell Unity players out there that “Rigorous quality control is of paramount importance” to them.

Then, hours later the patch arrived but with another bombshell on Xbox One. While the Assassin’s Creed Unity 1.04 PS4 update appears to have escaped danger, Xbox One owners on the other hand are in a state of disarray at the moment. 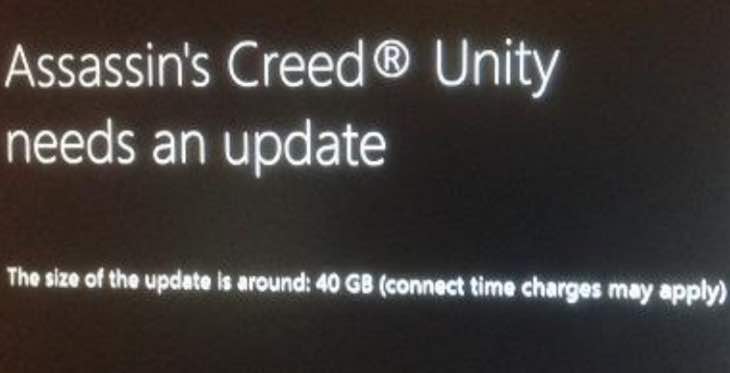 Instead of the intended 6.7GB patch install, the Xbox One Assassin’s Creed Unity Patch was 40GB for some users – if you can put that into perspective. This 40GB was actually the game reinstalling itself from scratch, with some reports even suggesting that many Xbox One players have had their Unity game save deleted, which is a nightmare if true.

Ubisoft has naturally apologised for the latest issue with the game, but have said that the 40GB install should still put Xbox One players on the latest version of the game without any other issues.

They are currently working with Microsoft to reduce the file size back to the intended size of 6.7GB, but at the moment they do not have an ETA on when the problem will be fixed up.

In the meantime, Ubisoft has offered a fix for those of you experiencing this with the disc version of the game. If this is you, Ubisoft advises players to uninstall the game and reinstall it. This should then restart the download and you should see the correct file size, not the colossal one.

That’s that then. You can now check out the official Assassin’s Creed Unity Patch 4 notes in full over on Ubisoft’s forums to check what the new update fixes compared to the previous version.

After that quote from Ubisoft though on rigorous quality control, it’s almost painful seeing the amount of memes that are flying around online at the moment.

Were you shocked to witness a 40GB install on Xbox One a few hours ago? Give us your experience with the new Assassin’s Creed Unity update below.