We know that Assassin’s Creed Unity is on the way to PS4 and Xbox One later this year, but now we have official confirmation of the game that Ubisoft will offer to PS3 and Xbox 360 users instead.

You may have heard that the trailer for this game was leaked earlier this week and now Ubisoft has since been forced to reveal it early. It’s going to available just after Unity ships, with Ubisoft revealing an Assassin’s Creed Unity release date of November 11. 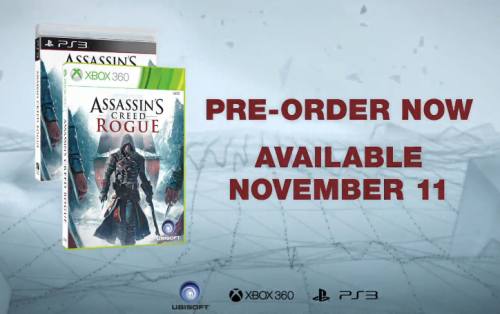 The game will feature Shay Patrick as the main protagonist. He’s an assassin-turned-Templar and it looks like the game is going to be set during the 18th century during the Seven Years’ War.

The trailer release below actually shows some lovely visuals. Too bad though it’s only a cinematic and obviously not a final representation of actual gameplay. GamesCom 2014 is right around the corner though so let’s hope that Ubisoft are ready to show off the game.

Are you still planning to get your hands on Assassin’s Creed Rogue for previous-gen, or is it all about Unity for you? Watch the trailer below and let us know what you think!