So far this week E3 has revealed some intriguing news, news which we at Product Reviews have been doing our best to cover. The news we have here will be of great interest for those who have been waiting for the latest game from Ubisoft’s Assassin’s Creed franchise, Revelations.

We have been keeping a close eye out for any information about the game we could get so far and recently brought you news of the new special editions which were announced at E3. Well now we can reveal the full length trailer which was also released by Ubisoft at E3.

The video, which we managed to get our hands on courtesy of YouTube, also indicated a release date for the game, November 15th. You can view it below as it flaunts some stunning graphics and gives us a close look at the now aged Ezio. Though his hair is covered with grey he still manages to slash his way through cities it seems, taking out small armies single handedly. 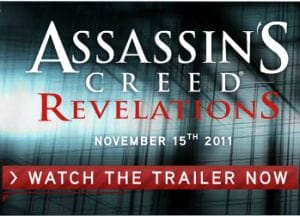 From the video we can also get a glimpse of the beautiful cities where the adventures of Assassin’s Creed: Revelations will take place.

What do you think of the trailer? Are you looking forward to getting the game?