Ubisoft today announced that fans of the Assassin’s Creed franchise who are looking forward to the release of Revelations will have the opportunity to buy the Collectors Edition of the upcoming title when it hits stores pre-Christmas. But instead of the normal one Collectors Edition, Ubisoft has gone one better and decided that they had so much more to give by releasing not one, but two separate editions to delve your daggers into. Read on to find out what is contained in these special editions.

Ubisoft has revealed that there will be two editions; the simply named “Collectors Edition” and the “Animus Edition” will both be yours to own from November 15 this year, and will contain additional in-game content, booklets and other goodies for Assassin’s Creed: Revelations.

First up, the simply titled “Collectors Edition” will feature a 50-page artbook, a copy of the game’s soundtrack and a feature length animated movie entitled Assassin’s Creed: Embers, that expands on the tale of the Assassin’s Creed main hero, Ezio Auditore.

You also get some additional in-game content that features two new additional multiplayer characters; the Ottoman Jester and The Crusader will be yours to take control of as well as getting access to the prison of Vlad the Impaler, where you can grab yourself a new close-quarters dagger to wield. 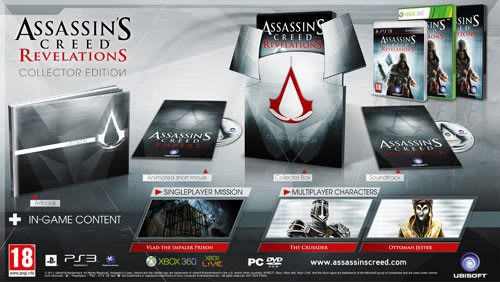 As for the Animus Edition (the more expensive from the two new special edition releases), you get an in-depth franchise encyclopedia, a copy of the animated movie Assassin’s Creed: Embers, and all of the additional content that we shared with you above. In addition, you will also receive capacity upgrades for your hidden gun bullets, bombs and crossbow arrows. You can also acquire the Amour of Brutus, which made an appearance in Assassin’s Creed: Brotherhood.

From the sounds of it the guys over at Ubisoft have gone all out to treat fans of the Assassins Creed series. With a bunch of new in-game content, and a new animated movie for good measure, fans of the franchise should definitely not pass this up.

As for which one you should buy, it is simply down to you. Obviously the Animus Edition will feature better stuff, but if the in-depth franchise encyclopedia is not really up your street, the Collectors Edition still fills a very important gap in your Assassins Creed heart.

Are you an Assassin’s Creed fan? Which of the two editions will you buy?