If you are a fan of iOS Assassin’s Creed apps, then you will be pleased to learn that a new one has been spotted, or so we assume. A new image has been seen and it shows what is believed to be a new game titled Assassin’s Creed Memories, although other details were a little sketchy.

However, we can tell you that this is not an Assassin’s Creed Unity companion app like some fans would have hoped, but rather a standalone gaming app. According to Touch Arcade, who were the ones to find this promotional image, the description of Memories says this game is a mixture of many different types, including strategy, card battle, as well as RPG elements.

The idea behind the game is alleged to focus on you recruiting Assassins and Templars with the aim of emphasizing your authority over rival guilds. 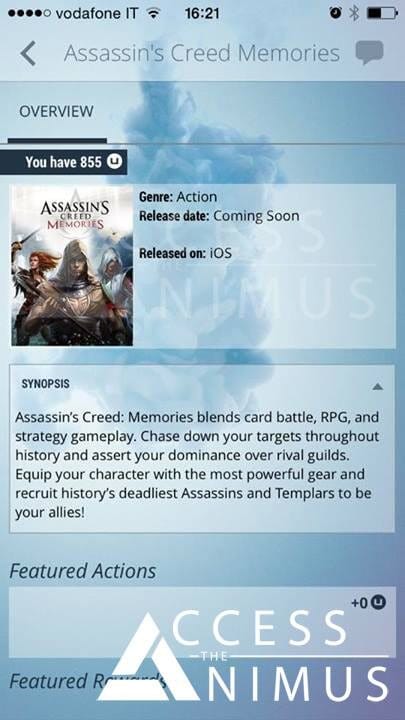 As for its release date, we have no idea, although the image does state coming soon, but that doesn’t really help does it? No pricing details have been suggested either, and so we will just have to keep an eye on the apps progress to see when its release will be, along with some of the games features.

We do expect many Assassin’s Creed fans to have something to say about the thought of this being a card game, as they feel they deserve a proper AC game to be released as an app. Are you a fan of such games?