We finally have some good news for PC owners who have been missing out on all of the Assassin’s Creed Brotherhood action that Xbox 360 and PS3 owners have been getting. Ubisoft has just confirmed a solid release date for the Windows platform.

After receiving numerous delays, we’re glad to see that Ubisoft has now slapped a release date for PC gamers. If you’re in Europe, you’ll be able to buy or download the game on March 18th, while US gamers will get it slightly later on March 22nd. 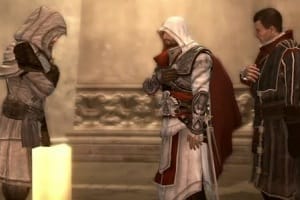 You may not realise it, but there’s actually four different versions of AC: Brotherhood to choose from upon release. CVG’S report here has full details on what is contained in each version, so head to their report if you intend on picking up a more premium copy of the game.

Along with a release date, Ubisoft has also confirmed the minimum PC specs which you’ll need to have in order to play it. The minimum processor is either an Intel Core 2 Duo 1.8 GHZ or AMD Athlon X2 64 2.4GHZ chipset, while you’ll also need to have at least 1.5GB – 2GB of RAM spare.

Take a look at the minimum and recommended specs over at CVG, and let us know if your PC will be able to play the game or not. We’ve also included a video below which shows the story trailer for PC – it looks excellent to say the least.