If the details that we have been bringing you so far about the upcoming videogame Batman: Arkham City, have not been enough to whet your appetite then this news is sure to do so, as it has been revealed by the BBFC, the UK ratings board, that the title will include nearly three hours of cut scenes.

According to NowGamer, the listing for the game passed through the board without being cut leaving the recorded total runtime of 165 minutes, that’s 2 hours 45 minutes of what normally includes cut-scenes and video content un-cut. This is sure to be enough visual action as it’s a lot longer than most movies, and having seen some of the graphics so far, it promises to be spectacular.

Batman: Arkham Asylum also had a lot of cut-scenes which added to the gritty atmosphere of the game. Arkham City is bound to be even larger as there has to be support for the enormous cast of characters, the non-storyline elements such as the riddles from Riddler in Arkham Asylum and the great gameplay that is certain to be even better than that which we were exposed to in the previous title.

The BBFC listing also unveiled an ESRB level of maturity rating for Arkham City, and it’s what we would have expected. It will be a 15 rated game in the UK due to the violence and the thriller factor, but does not come across as too gory, scary or sexually orientated so as to include an 18 rating. With the length of the cut scenes throughout the game being so long, will it prove to be too much and over power it or is the equally as large amount of expansive gameplay enough to balance the game perfectly? Let us know what you think in the comments below. 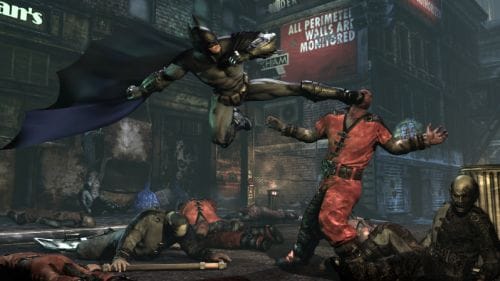