We didn’t think anyone would leave it this late for revealing some possible iOS 5 features right before Apple’s WWDC 2011 press conference is due to start, but a new picture is doing the rounds online and it’s apparently a leaked shot of iOS 5 in the wild.

The image shows one main feature that is thought to be coming as part of the huge iOS 5 update, and that’s Twitter integration. The screenshot, which has been provided by the guys over at Tech Crunch, shows a new notification system at the top of the screen, with the Twitter update reading ‘2 mentions’.

There’s also a mini Twitter logo accompanying the text, and while it still could turn out to be a fake, it’s a very good fake we might add. If this picture turns out to be true and Apple’s new notification system will appear in the top part of the screen, compared to the current ‘pop up’ system, then that moves us nicely on to our next thought.

Have a look at the picture below: 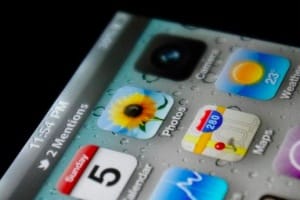 Does that notification bar remind you of anything? Because it sure looks a lot like the notification system featured on Android devices where you slide down the menu at the top to bring down alerts. Dare we say it, but are Apple planning to directly copy a Google feature for iOS 5? It’s probably too early to tell, but it does pose an interesting question just a few hours away from Apple’s keynote.

The good news, is that all will be revealed soon. Let us know your thoughts on this and tell us if you would welcome Apple ‘borrowing’ the notifications menu from Android.