We have seen many strange apps on iTunes, such as Testicular Cancer Checker 1.1, but Confession: A Roman Catholic App has to be top of the list. I do not wish to be controversial in anyway, it’s just I did not ever presume to ever see one developed. Having said that, you can be certain that many Catholics will give it a try.

The price is just $1.99 and offers Catholic users advice in what they should do for every penitent. The idea of admitting your sins to an iPhone or iPad is something that could become an issue, as sinners tend to like feedback on a personal level — not inputting text in a device and waiting for an answer.

However, we are told that the app is not designed not to replace traditional confession, this is only to help make things easier and to help you understand actions that you have taken. You are still encouraged to go to confession to see your priest, only if you feel that you still need to receive absolution. 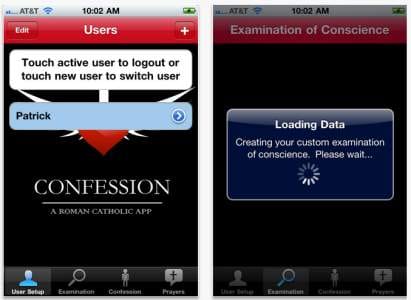 According to a report on BBC News, Pope Benedict XVI has been asking that both Catholics and Christians embrace technology. We were shocked when the Pope also said that using social network services was not a sin. We have to wonder if the Catholic Chruch is starting to lighten up?

For more details on this app visit iTunes. Do you think you will be using the Confession: A Roman Catholic App?