There is no doubt that Apple fans will be looking forward to the second half of this year with both iPhone 5 and iOS 6 about to launch, and it will be a part of the year that’s likely to benefit Apple more than Android. This is due to Apple’s software getting one major update a year, iOS 6 up next, and the fact they launch just one phone a year, which has an expected release date this fall.

Some recent research has looked at Android’s market share before the iPhone 5 launches, and it clearly shows Android is peaking while iOS has gained a lot of ground. You can see the facts and figures below, but in a nutshell you will notice a massive jump for iOS from 23.2% to 33.2% year-on-year. In this same period we see that Android has dropped from 60.6% down to 56.3%, although Google’s OS is still the clear leader where mobile operating systems are concerned.

BlackBerry ruled the business market but has since been invaded by Android phones and even Apple, although some analysts believe that the iPhone 5 will launch into enterprise even more later on this year and next, so BlackBerry is likely to see a bigger drop in 2013. The Q2 results show BlackBerry OS at 6.5%, which is a drop from 10.5% last year, so things are not looking good for RIM. 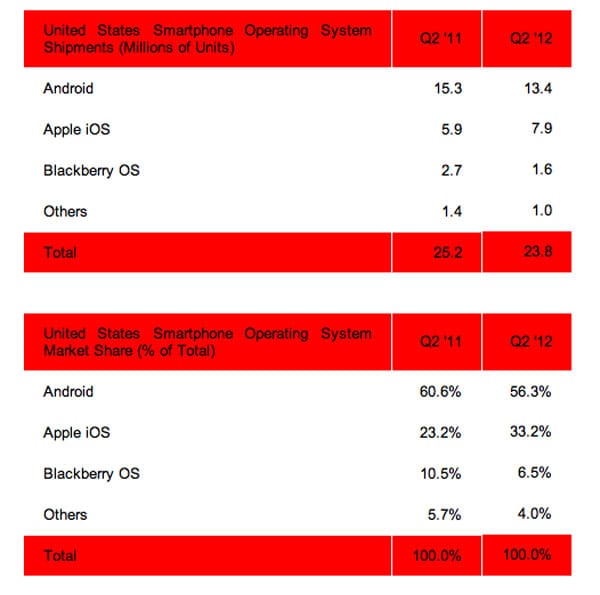 If we take into account the drop for Android when comparing the Q2 to last year, and also the amount of people waiting for the iPhone 5 to release, 80 million users, then it is obvious that Apple’s growth will surge even more with iPhone 5 and iOS 6 both arriving in the next couple of months.

If you buy a new smartphone over the next 12 months, what do you think it will be? We are sure most of our readers would name an Android phone or iPhone 5, although when it comes to choice and price it seems that Android continues to have the edge. We’d also love to know what your current phone is, and if you’ll be changing brand over the next year.

It is worth noting that the figures shown above are thanks to research carried out by StrategyAnalytics.com, which take a look at different Wireless smartphone strategies for the various brands.