You’re probably aware that Apple are planning to hold an iPad 2 event on March 2nd, but how you would feel if the device they unveil isn’t actually the ‘true’ successor to the current 1st generation iPad?

We first touched on this theory a few weeks ago, as Daring Fireballs’ John Gruber revealed that the device Apple are now planning to unveil won’t be the true iPad 2, but instead a revised version of the iPad 1, but with a few hardware upgrades, such as a front facing camera and more memory to play around with.

However, a fresh article published over at iLounge revives the claims that this new iPad we’re about to see, may end up being known as the iPad ‘1.5’, rather than a true next gen iPad 2. This does put a certain element of confusion in consumers minds though – for a variety of reasons.

Apple may still decide to call this the iPad 2, to protect themselves from a consumer backlash to those who believe they might be buying ‘half a product’ so to speak. If this is the case, then we may see the proper successor to the iPad 2 – possibly called the iPad 3 towards the end of the year. 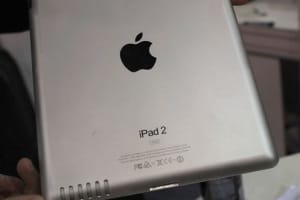 [note: This is a mock-up image, not the actual iPad 2]

The report over at iLounge goes on to say that Apple may only preview the device at the event on March 2nd, with a retail release now happening in the Summer, rather than April. It’s all pretty interesting stuff, not to mention a little mind boggling at the same time.

Would you be happy buying a product which Apple may label the iPad 2, but doesn’t turn out to be the true ‘second generation’ iPad? Or would you be willing to wait until the iPad 3, which would be the third iPad model, but the actual successor to the iPad, with a design overhaul and radical new hardware specs- this is just something to bear in mind in the midst of the iPad 2 media frenzy.

You can keep up to date with all the latest iPad 2 news here.