The Apple Watch may be released in March, along with iOS 8.2, and more details have come to light about the device in the latest beta version of its operating system. The latest information helps explain some of the Apple Watch settings and interactivity thanks to its iPhone companion app.

News has come to light on the Apple Watch application, which helps to give a greater insight into what to expect from Apple’s next big device launch. There are some people that have been making fun and believe that the wearable will be a letdown for the company, although the same was said about the iPad, and look what happened there.

9to5 Mac has been testing out the new Apple Watch Companion app for the iPhone and has come across some rather interesting features. Take its home screen for example, this will be the place to allow you to organize all of the applications on your Apple Watch, such as the clock. 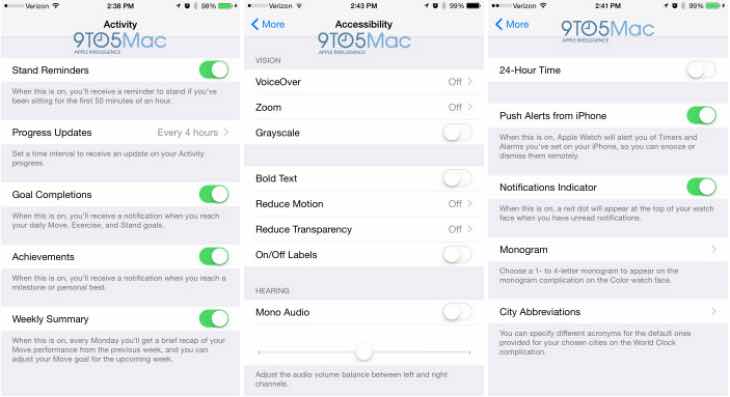 Some of the clock functions will be the many different faces, and other customization features to make your device more individual to you. Seeing as though Apple’s upcoming device lacks a keyboard it will make full use of voice technology to reply to messages, which 9to5 Mac goes into far more detail about. They also share details on Maps, Accessibility, Passcode Activity, Motion & Fitness and much more.

For those of you that cannot wait for the Apple Watch, then you might not be surprised to know that there was a fake one being sold at CES last week.

No doubt there will be some of you worried that the iOS 8.2 update will add more bloatware to the iPhone, seeing as though the Companion app will be part of the update, but would you agree with that?