Owners of the iPhone 4 already have to use a micro Sim card for their device, which can be a problem if they want to use a different cell phone at any time. There are numerous adapters available to purchase but it is still inconvenient. Now Apple want even smaller Sim cards as standard across the industry.

Reuters are reporting that the company has proposed a smaller Sim card than the ones it currently uses in the iPhone and iPad. This will enable cell phone manufacturers to produce even thinner handsets to what we see now.

Apple is working with network operators on the idea, and is a thawing in relations between the various companies. Apple relies on cell phone carriers to offer subsides to keep sales of the iPhone remaining strong.

A spokesperson from the European telecoms standards body, has confirmed the proposal from Apple regarding a new standard for Sim cards. A decision has not yet been reached, and could take up to a year. Orange and other operators have welcomed the move by Apple. 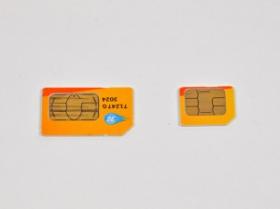 Anne Bouverot from Orange said they were happy to see Apple submit the proposal to ETSI. She added that devices using the smaller sim cards could be available as early as next year. Would you like to see a smaller standard Sim card?