The Apple vs. Samsung lawsuit has reached a verdict over the patent battle and it is becoming clear who the real winners are, although it might take a number of months before we see the real results during the fallout. The Samsung Galaxy S2 could be one of the first targets for Apple considering it’s still available for sale around the world, and the recent jury verdict makes this an easy target for Apple. The Galaxy S3 is a completely different story and saw Samsung deliver a more unique design, which could also be seen as good for the consumer considering the more variety in smartphone designs would mean more choice.

Apple vs. Samsung patent verdict — in a nutshell Samsung need to pay Apple around $1.05 billion for infringing their intellectual property in a willful manner. Apple also gained immediately from this verdict, which saw their share price jump to a high of $675 and we’re sure more benefits will be seen for Apple in the coming months. This could include Google delivering a blanket license with Apple for certain features it wants, which would otherwise cause problems for Android thanks to this patent verdict.

Samsung on patent verdict — we might only be 24 hours since the verdict but that hasn’t stopped official statements being released by both the Apple and Samsung camps, which give us a taste of what their plans will be next. You can see what a Samsung spokesperson said below.

Apple on patent verdict – Apple had their spokesperson, Katie Cotton, issue a statement moments after the verdict and this can be seen below. We’re sure that some Android users won’t like some of her words, especially when she said “stealing isn’t right“. We’d love to hear your thoughts on both Apple and Samsung’s statements in the comments below.

Tim Cook, Apple’s CEO, gives his thoughts on the Jury’s verdict – Cook spoke about the verdict benefiting innovators everywhere when he addressed Apple’s employees, although this is a direct contradiction to Samsung feeling this will hurt the choice for consumers. You can see a few of Tim Cook’s words below. 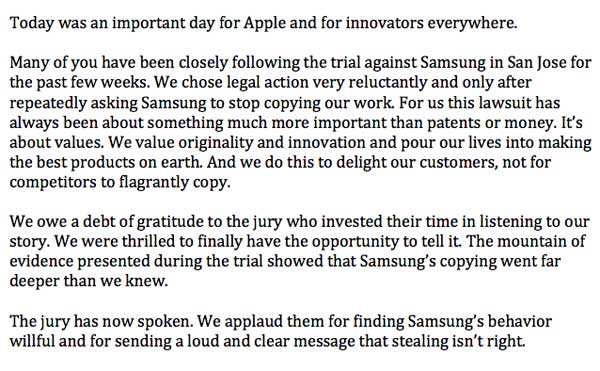 Apple vs. Samsung patent verdict helps iOS 6 – it might be too early to see how Apple’s iPhone 5 and iOS 6 can benefit from this patent verdict, but some things are clear and this includes an expectation that Android will change a lot of UI behaviors in the near future unless they purchase a licence from Apple. This includes multitouch scrolling behavior and tap-to-zoom, which could mean a number of users choose iOS 6 over Android when it comes to how the UI works. Diehard Android users will never change, even if they lose some features they enjoy.

One thing is for sure and that is an increase in differentiated designs in the coming years, although we wonder how many different ways you can create a smartphone?