The company already has Apple TV as an accessory that allows users to stream movies and TV programs straight to their TVs from iTunes. New evidence suggests however that they may be at least thinking about producing their own television set.

The evidence that has started the rumor mill comes from 9to5Mac who came across a job opening description for an AC/DC Power Supply Engineer that suggests applicants would be working with TVs. The actual job description which can be found at the site, lists devices that applicants will be working with in such an order that separates ‘standalone displays’ from ‘TV’ which is where the suggestion of a TV being in the works has emerged. 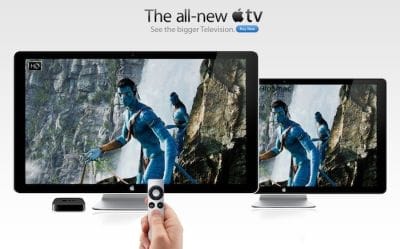 Erica Ogg over at Cnet seems to think Apple making a TV wouldn’t be ‘much of a stretch’ for them. They already have a market for it as everyone has a TV, and they basically already build products like this with their monitors which are already well-regarded on the market.

Don Reisinger from Slashgear finds the prospect of an Apple TV boring however; as he feels there is just no need for one in the market, that doesn’t offer anything different to what is already out.

What are your thoughts on an Apple TV? Would you switch your TV for an Apple one if they did produce one? Let us know.