Until we see a device release, news about that product would most likely be whispers only, and while great reading, when it comes to Apple rumors they are some of the best kept secrets. One person recently put it best, when they said “CIA, NSA, MI5…then think of them consulting Apple for tips”.

We read a recent article by Cho Ji-hyun of the Korea Herald, which explains that Apple’s iPad 2 may feature display panels from Samsung. This has to be one of the strangest rumors we have read in some time, when does an iPad 2 rival help out Apple?

While we like their reasoning, explaining that Apple want to include Samsung’s PLS (Super Plane to Line Switching) panels, we find this far-fetched considering trusted names like John Gruber are going with no change in display, claiming a 1024×768 screen the same as Apple’s current iPad generation. Would you like to see the iPad display improved for the next-gen tablet?

Apple may choose to support a much better display in the iPad 3 release, but we feel this generation will not include a change of screen, certainly not the maker of Galaxy Tab 2. You can expect iPad 2 to release with a thinner profile, and faster processor. 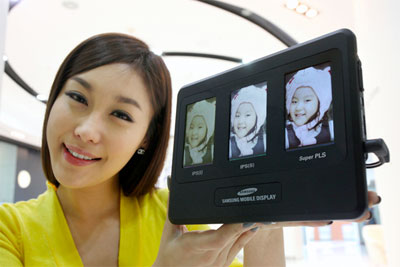 Would you like to see a much-improved display in iPad 3, or do you want Samsung’s PLS technology in iPad 2? You can read more about Super PLS on Samsung’s official site. Keep up with all the latest iPad 2 news, or watch a video below that looks at the HP TouchPad vs Apple iPad, and touches on the rumored iPad 2.