There has been a lot of talk lately if Apple was going to make a different size iPhone, but Apple could be looking to have a bigger range of tablets to offer us. There is now talk of a device which could be in between the current iPad and iPod Touch.

AppleInsider are reporting that an industry expert claims that Apple is working on a device which will have a Retina Display and could be an iPad 3. The device may be smaller than the current iPad or bigger than an iPod Touch.

The so called iPad 3 would have a 9.7 inch IPS panel that uses fringe-field switching technology. This will allow for a wider viewing angle, and also be clearer to view while under sunlight.

The source of this information analyst Ming-Chi Kuo, correctly predicted what the iPhone 4 display would be like. He was also correct in predicting the handset would have double the RAM of the current iPad. Kuo has recently said that the iPad 2 will not be getting the new display yet as Apple could not produce enough of them. 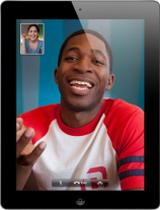 And now there is talk of Apple offering an oversized iPod Touch to fill the gap between its smartphones and the iPad. Apple has criticized other companies’ smaller tablets before, so would not want an iPad with a screen between 5 and 7 inches.

We have already told you about the iPad 2 leather case which has cropped up, now 9 to 5Mac are reporting that some screen protectors confirm that the new iPad will have a front facing camera. The camera will be at the top of the display, with the device taller and narrower than the current version.