Traditionally the iTunes Festival has been held in the UK but for 2014 Apple has moved the event to the US, confirming that live streaming will be available. A superstar lineup is set to feature at the gigs and Apple will offer a facility for PC and mobile users to enjoy all of the action.

The iTunes Festival will be held at SXSW in Austin, with Apple promoting five amazing shows and five amazing nights. Already confirmed to appear at the Festival are Coldplay, Pitbull, Imagine Dragons, ZEDD and Keith Urban. The iTunes Store will be providing live and free coverage of all of the acts across the 5 nights, viewable on iPhone, iPad, iPod touch, Mac and PC.

Alternatively users can watch the iTunes Festival live through the official app on any of their iOS devices and stream it via Apple TV up to the big screen in HD. The first night of the iTunes Festival will start on the 11th of March and run through until the 15th. The full line up is yet to be confirmed but some acts including London Grammar, Willie Nelson and G.R.L. have been added. 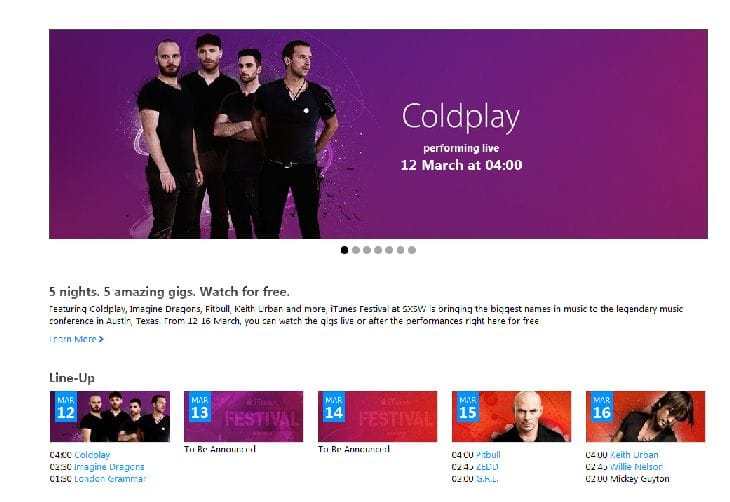 Disappointed Brits who will not be able to enjoy the 2014 iTunes Festival in the UK will hold hope that it returns next year. After hosting the big event for the last 7 years, it was only inevitable that the Festival would return home at some stage. Thankfully Apple are using this move as a chance to showcase their streaming service and products to us all, here’s hoping for next year.

Will you be streaming the iTunes Festival live through Apple’s facilities or do you plan on attending?