Having made the decision that the MacBook Pro would be a better choice for you rather than the MacBook Air, the next decision you have to make is Retina display vs. Non Retina. Personally, it is a no brainer, but there are so many people out there who are finding it tough to come to the correct decision.

Apple currently has three versions of the MacBook Pro, the non-Retina model, and the 13-inch and 15-inch Retina versions. So what are the differences and what would make you choose one over the other?

Looking over the specs of each it is clear they differ far more than just their display, although this has something to do with the non-Retina Pro being a 2012 model, and the 2013 MacBook Pro 13.3″ with Retina being the 2013 refresh. 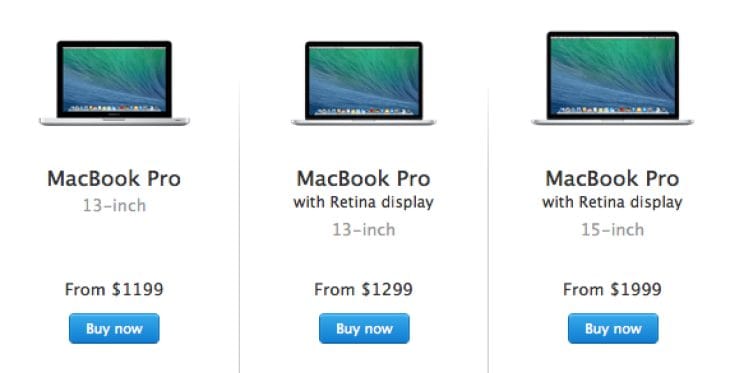 MacBook Pro vs. MacBook Proâ€¨with Retina display — It is only fair that we look at the 13-inch model, as the non-Retina model does not come in the 15-inch screen option. The former model supports up to a 2.9GHz dual-core Intel Core i7 processor, compared to that of 2.8GHz dual-core. However, it is worth pointing out that the latter is the more up-to-date Haswell chip.

Then there is up to 8GB for the MacBook Pro and 16GB RAM for the Retina version. Storage also varies with up to 1TB 5400-rpm hard drive; or 512GB solid-state drive compared to 1TB flash storage.

Graphics is a huge difference between the two though, as the 2012 MacBook Pro has the Intel HD Graphics 4000, which is the same in the MacBook Air, compared to Intel Iris Graphics in the 2013 Pro with Retina.

Battery life differs as well between the two, 7 hours wireless compared to 9 hours wireless. A complete breakdown of the specs from both versions of the MacBook Pro can be seen on the Apple website.

To help you even further we’ve included a video review of the 2013 MacBook Pro Retina 13-inch vs. 2012 MacBook Pro non-Retina 13-inch below. This in-depth comparison should finally make you decide; although we are pretty certain if will be with Retina because there is just $100 difference in price.