With the lack of iPhone 5 appearance at the WWDC 2011, it means that rumors about the device continue to circulate. We previously brought you news of the possible reason for the delay of the smartphone being due to its new 8 megapixel camera that it is rumored to have.

There were even rumors that the iPhone 5 would feature a 12.6 megapixel camera. Another rumor surrounds the use of speech recognition in the device and the news we have today provides confirmation that these rumors could be true, so long as the evidence is not fabricated.

The news comes from MacRumors who came across two screenshots seemingly of the next generation smartphone’s iOS menu, which has the option of Nuance preferences. These screens were posted via Twitter by @ChronicWire. 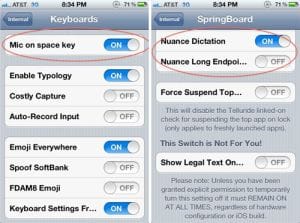 Rumors that Nuance and Apple were working together to give the iOS speech recognition features surfaced a while back but this is the first evidence of such a partnership. According to the article at MacRumors the source is normally a reliable one but we will just have to wait for an official confirmation from Apple to know for sure if the news is true.

Does the use of speech recognition appeal to you?