As Apple’s March 2nd iPad 2 event is almost upon us, we have to tell you about an image we’ve come across which could turn out to be a very close representation of Apple’s next iPad model.

The image has surfaced from BGR, and has been provided by an anonymous tipster. They have since updated their article to say that while this isn’t an official render as such, it could still be an accurate design of what the new device will look like. Without further ado, let’s take a look at it: 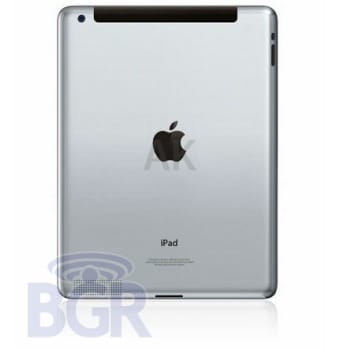 As you can see, the design favors an aluminium design around the back, complete with a rear camera and a brand new speaker. You’ll also see that the branding still contains ‘iPad’, rather than ‘iPad 2’ as some of you may have been expecting. It’s a shame that we can’t see the front of the device to see if the aluminium design is spread all over, or if the device will include a front-facing camera.

Apple’s event is tomorrow, so we will all find out very soon. Take a look at the picture closely above and let us know your thoughts on it. Would you be happy if the official iPad 2 ended up something like this, or would you prefer a different color / design?