We have some new details regarding the iPad 2 rumors now, as it has been confirmed that some European retailers are now listing ‘out of stock’ messages for almost all versions of the current iPad, meaning that Apple may be announcing the new version very soon.

According to this report from BGR, UK retailer Carphone Warehouse are the ones who have given the biggest hint yet that the iPad 2 could be coming to the Apple store soon. If you head to their website, you’ll see that they are currently only offering the 16GB and 32GB versions of the WiFi iPad, meaning that the 64GB WiFi and ALL versions of the 3G iPad are sold out – this can’t be a coincidence surely? 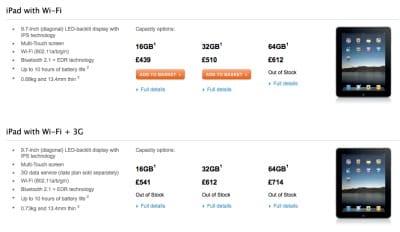 Further hints can be seen via Ingram Macro, as it has been confirmed that the European distributor has also sold out of various iPad models, which includes both the WiFi and WiFi + 3G varieties of the device.

What are your thoughts on this? We can’t put this down to the fact that the stock is simply running out due to normal circumstances. Once an Apple product is rumored to the scale that we’ve seen for the iPad 2, it generally means it’s coming. This is probably the first piece of the puzzle with more likely to follow before the end of the week. Stay tuned for further updates.

You can read about some more iPad 2 rumors here. Don’t forget to keep checking the Apple store in case Apple decides to update it secretly like they have done in the past.