The battle of Google vs. Apple will likely continue to the end of time thanks to the loyalty shown by fans on both sides, although one topic that is not so straight forward is Apple’s iOS 6 maps vs. Google maps. The latter application is well established and when we first heard about Apple launching their own maps within iOS 6, we knew it would be a major challenge although the launch Apple wanted certainly failed to happen.

We looked at the differences between Google maps and Apple’s iOS 6 maps towards the end of last month, which had been supported by a few videos showing how good both of their services looked in the 3D views, how good the driving directions were, and also what service performs better when you have an emergency. You can see that article here and watch the 3 videos as well.

The screenshots below were taken on an iPhone 5 running the latest iOS 6.0.1 update, which reveal some nice detail when in the 3D map mode although we still noticed a few of the glitches remaining for other parts of the world. The latest iOS 6.0.1 update or iOS 6.1 beta hasn’t fixed these map issues, and it seems that Apple has clearly shown how they will tackle problems with their maps.

In iOS 6 the Apple maps “report a problem” link can be seen in the image below, which we’ve highlighted thanks to this link being very small. While it had been there since the initial iOS 6 software update, it seems that Apple want to direct users to this link a little more clearly considering all the problems still remaining and the fact that user feedback is key to getting these issues fixed. 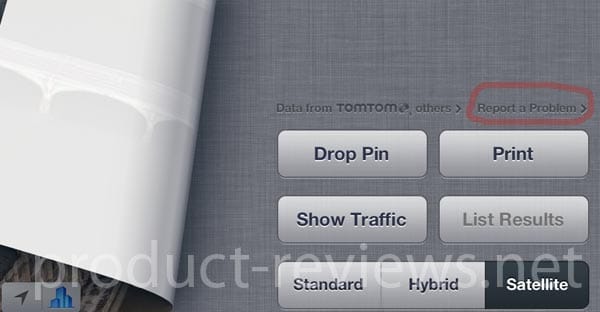 We might have wished for some major updates to Apple maps in iOS 6.1 beta 1, but this isn’t the case as we reported in the full release notes although there are a few changes and one prominent change to Apple’s iOS 6 maps. The link to report problems in Apple maps has gone and been replaced with a big button, which can be seen in the image below and clearly shows how Apple want to make it much easier for users to report any problems they find in iOS 6.1 maps.

Have you reported a problem you found in Apple’s iOS 6 maps? It is worth pointing out that Google also ask for users to report problems, which could be a much quicker way to get an issue fixed as soon as possible. You can see a video below that shows how to report an issue with Google maps.