When we heard last week of a rumor suggesting the iPad Air 2 event to take place on October 16th, we dismissed this for a couple of reasons. The first is that it is earlier than expected, and the second is that it would be on a Thursday instead of the usual Tuesday. However, we had to discuss the possibility of this date earlier today seeing as though it has started to gain more traction, and if this is the case, then what about the Apple invite date?

Whenever there is an Apple event the invites usually go out around a week before the event, although with the iPhone 6, this happened around 12 days before. This means Apple iPad event invitations could be sent out either today or tomorrow, dates of which we have circled below. 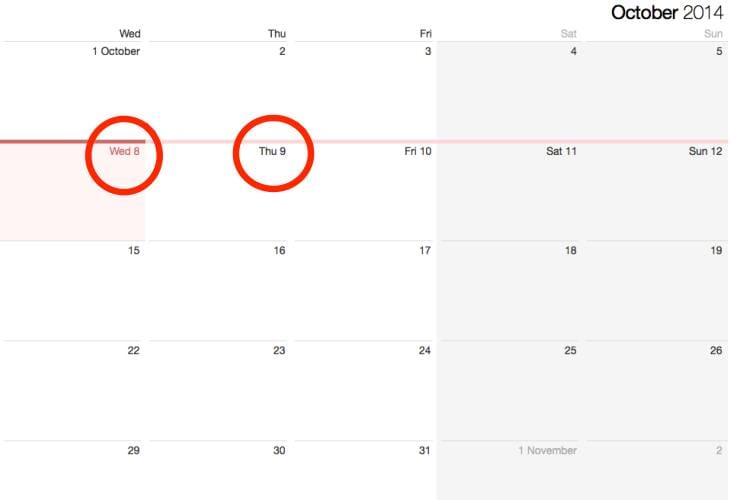 If we do not hear anything from Apple today or tomorrow, October 8th or 9th, then the invite dates for Apple’s October special event will more than likely be either the 13th or 14th, with the event taking place on October 21st, which is what we pretty much expected back in mid-September.

Whatever days it may be, we look forward to seeing just what Apple has planned during its keynote this month. We know they will upgrade the iPad range, with a possible iPad Pro, although there is speculation that we could see a new Mac mini for 2014, along with upgrades to the MacBook range.

However, there is hope that we will finally see the iPod touch 6G released, but with sales in a slump, there is even rumors Apple could not even release an iPod touch 6th generation ever.

Update: Well Apple has shocked us by sending out invites today, and announcing its next event for October 16th.