In New York this morning the much anticipated Apple Education Event kicked off and as expected by most people, was nothing to do with either of their anticipated iOS devices, the iPhone 5 or iPad 3. Instead the event revealed a new service from the company being called iBooks 2, which allows for a new range of digital textbooks to be accessed on their iPads.

According to the article from CNET, users will be able to interact with these digital textbooks very much the same way they can with the current books app on iOS devices, with traditional tapping and pinching gestures being taken advantage. They will have access to movies within various chapters and pages of the textbooks at the touch of their fingertips, making it a more enjoyable educative experience.

Other features of the iBooks 2 app include the use of study cards, which are similar to flash cards. They allow users to make notes on a 3” x 5” card, putting the definition of a topic on one side and the topic title on the other. Adding notes to pages and highlighting text are also features that the app allows. Users will also be able to view and rotate 3D images, giving them more of an idea of what something in the textbook looks like in real life.

The company now has partnerships with various companies that they believe account for 90% of all the textbooks in the US, which include Houghton Mifflin Harcourt, McGraw Hill and Pearson. This is something that they feel is key in order for the app to have success.

The new app can be found in the App Store and can be downloaded to the iPad for free, as is the original iBooks app and also the Newsstand app. Textbooks that are purchased will then be placed there, which will range in cost up to $14.99. They also range in educative subjects including math and science. What do you think of today’s education event? Are you surprised or disappointed that nothing else was revealed? 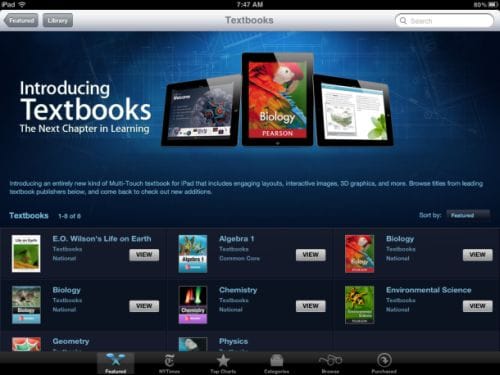