The tablet market is the most competitive it has ever been with so many different devices available on the market, yet Apple still seems to be running the show with their iPad. Hoping to make an impact on the market and maybe steal some limelight from Apple is Acer with their newly announced Iconia Tab A700 which is debuting at CES this week.

Earlier this year, the company also announced the Iconia Tab A200 but failed to raise any eyebrows when it came to what it was packing. However the impressive A700 device looks to be an improvement and may surprise a lot of skeptics who believe the iPad is untouchable.

For starters it comes equipped with a quad-core processor, a step up from the dual-core processor that the A200 is packing. It also has a head turning 10” Full 1080p HD resolution display and will be running Google’s latest tablet OS Android Ice Cream Sandwich, also an improvement from the A200 which will run an earlier version. As CNET explains this beast not only has the iPad in its sights but also is aiming to take on another genuine iPad contender, the ASUS Transformer Prime.

While little else was revealed in the brief teasing of the Acer Iconia Tab A700, reports are suggesting it will also be packing a NVIDIA Tegra 3 chip, similar to the one found in the Transformer Prime. Release details were also scarce although a second quarter launch period was indicated but unfortunately no word on availability or price is available. We will just have to wait and see what else is revealed during CES.

What do you think of the Acer Iconia Tab A700? Do you think there will be an iPad contender unveiled at this year’s CES? 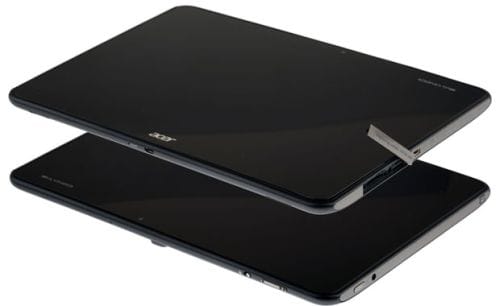