We now know the official Apple Event time for March 21, which is to start at 10 am PT, 1 pm ET at Cupertino, or 6PM if you live in the UK.

It’s obvious that Apple has not offered any details as to what products they will be launching; they have tried offering some sort of cryptic clue on the invitations, which says, “Let us loop you in.”

Now we do not know what they mean by that, be most of us suspect three things, and that is the new, smaller iPhone SE, a 9.7-inch iPad Pro and also updates to the MacBook lineup. 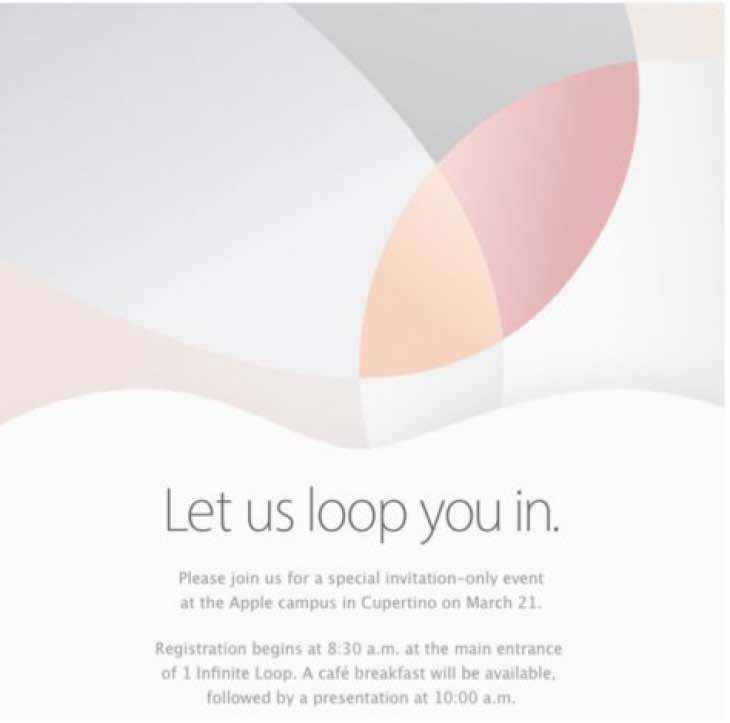 Apple always has a way of surprising us, and so one, or some of these devices may not even get revealed, but the evidence does seem to be building up.

Ok, so we cannot say for certain if these rumored products will be launched or not, but we know there is still a market for a 4-inch iPhone, as so many of you have been eager for one to be released.

As for a smaller iPad Pro, we are not too sure on that one, especially if the iPad Air 3 is at risk. We know that many of you will like the improved features that a smaller Pro model would bring, but it would also carry a higher starting price as well – something we highly doubt the Apple faithful would enjoy.

Finally, we do expect to see new MacBook upgrades, as they are in need of the Intel Skylake processors. Not only that, but it’s been several years since Apple updated the design of the MacBook Pro, and so a design change would also be very welcome.

What are your expectations for the Apple event later this month?