If you are the owner of a tablet, the likelihood is that it is an iPad. At least that’s what the latest survey from Kantar Worldpanel ComTech suggests, as it reveals that Apple dominates nearly ¾ of the UK tablet market. That means out of the 3.62 million people who own a tablet in the UK, 73% of them own an iPad.

If the statistics continue as they are, another 2 million people will be added to the list of tablet owners over the next year. As you can see the number represents a significant growth, however no all of them will be getting an iPad. In fact according to the reports, only half of those 2 million intend on getting one.

The nearest competitor to Apple in this market is currently Samsung with their Galaxy Tab. amongst the potential tablet consumers 6% will be aiming to get a Samsung tablet according to the survey and 28% are still unsure as to what brand they will invest in. this means the dominant share in the market over the next year could be up for grabs.

One theory behind Apple’s success in the tablet market comes from Kantar’s Global Consumer Insight Director, Dominic Sunnebo, who believes it is linked to their smartphone market success, i.e. the success of their iPhone. He revealed that ‘80% of people who already own an iPhone and plan to purchase a tablet intend to buy an iPad.’ This is an advantage that for the meantime none of the other manufacturers are able to compete with.

Some of the other findings from the survey revealed that 41% of tablet owners have used their device with Wi-Fi outside of the home and 90% have used Wi-Fi with it at home. Also 3% of the subjects have no knowledge of tablets, while only 16% say they have a strong knowledge of them.

Check out the article at the Guardian for more details on Apple’s UK tablet market success. How long do you think their dominance will last? 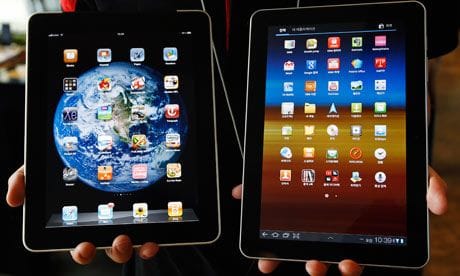