We have some important news for those that own certain Apple products now, as the company has just announced a surprise Apple charger recall for January 2016 due to a health risk.

This is obviously a surprise as we never usually hear about Apple having to recall any of their products. This isn’t a forced recall either by the looks of things, as Apple has announced it themselves by setting up a new page on their support section.

The Apple charger recall affected model list applies to two prong wall chargers sold between 2003 to 2015 and can apply to iPhone, iPad and Mac products.

The regions affected that have been listed by Apple are Continental Europe, New Zealand, Korea, Argentina, Australia and Brazil. 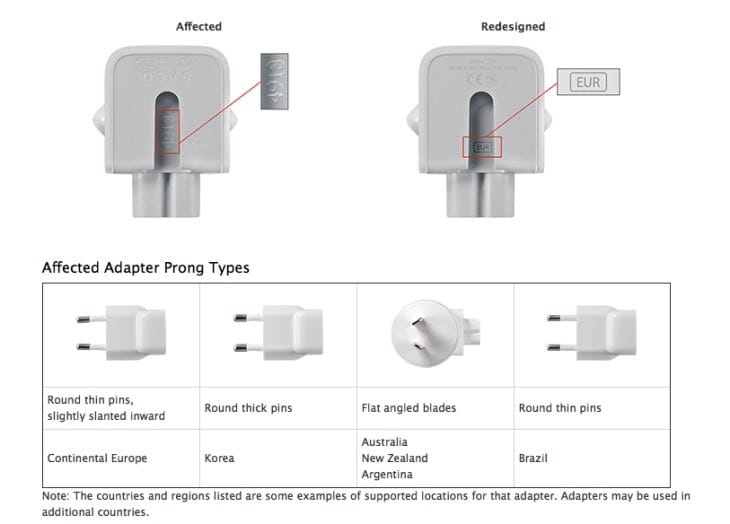 If you do have one of the chargers highlighted by the image above, Apple has said that they have a chance to break and could create a risk of electrical shock if touched.

As a result, Apple advisers consumers to send their charger in for a free replacement which you can apply for at this link – alternatively you can set up a Genius Bar appointment at your local Apple store.

Chargers that were designed for use in Canada, China, Hong Kong, Japan, United Kingdom, and United States are not affected by this recall so make sure you are aware of this – however, this recall does affect you if you previously purchased the Apple World Travel Adapter Kit.

Are you affected by this recall? If so get in touch with us below and let us know if you have managed to successfully get a free replacement.