We are getting reports today from a number of our readers about their iPad or iPhone 5, 4S and other models running into activation problems with iOS 7. We had an email this morning from one iPad 4 user claiming that they could not activate their device that runs iOS 7, and this error message only appeared today that also locks them out of using their tablet.

After receiving this email and finding hundreds of comments with similar problems we took a look at our iPhone 4S running iOS 7 beta (Gold Master). This device also has the same issues, and right now states “Could not activate iPhone”. This is thanks to the Apple activation server being down for iOS 7 devices, so that could be either an iPad or iPhone.

You can see the message one of our devices states below, which basically explains the iPhone could not active because of the activation server being temporarily unavailable. You are then told to try and connect the iPhone, or iPad, to iTunes for activation. 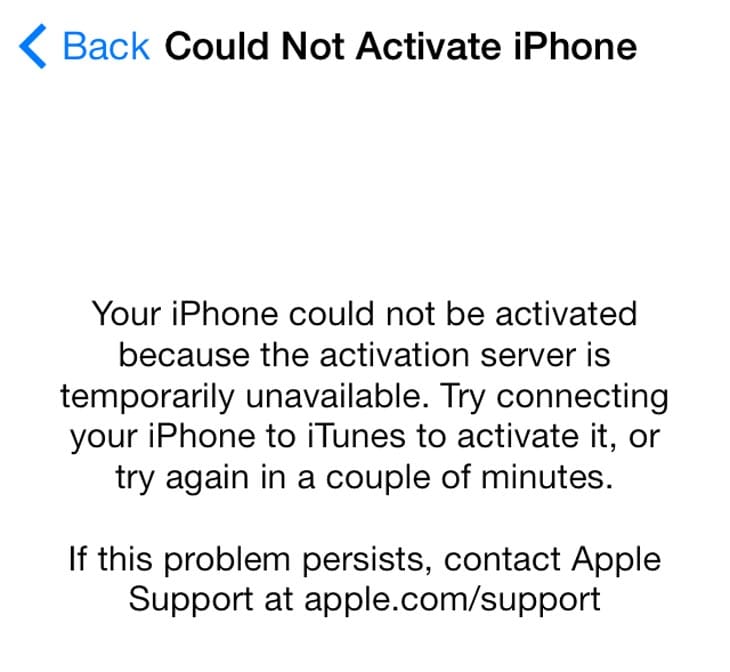 When you connect to iTunes and try to backup your iPad or iPhone you will see another error message, “iTunes could not back up the iPhone/iPad because a session could not be started”. This is thanks to the phone or tablet being locked out until it can be activated.

If you are one of the 6 million Apple developers and didn’t update your device to iOS 7.0.2, then you might be experiencing these problems today. We expect the Apple activation server to be back up soon, but at the time of writing it is still down.

We will look for a fix or another way to update, but in the meantime we have not found a solution for either the iPad or iPhone.

If you have seen the activation server is temporarily unavailable message, did you have iOS 7 beta software installed or were you running a public release?