With MWC 2011 now over, it is time to see how the global app market will be influenced by all of the announcements. During the event we learned of a number of new devices, not only smartphones and tablets, but news that Nokia and Microsoft were going to pull their resources as well.

Knowing the affects is certainly a tough job, but research2guidance has taken a look at everything of importance, and now believes that they have details on how the app market could be affected. The first major affect has to be that Symbian looks to be dead; yes there will no longer be people using the OS as much. However, they will now be made up of Windows Phone 7 users. We also need to remember that those with a Nokia WP7 device will still have access to the Ovi Store.

The tablet explosion is about to happen, and these devices will have a huge impact on the app market, as there will now be more devices demanding them. We have no idea how Android smartphone apps will work on tablets, and how long it will take the different developers to update them? We can see from the research that more than 15 million iPads have been sold in just 9 months, just imagine how many Android tablets would have sold by this time next year? You then need to multiply that by how many apps will be downloaded on each of these devices as well. 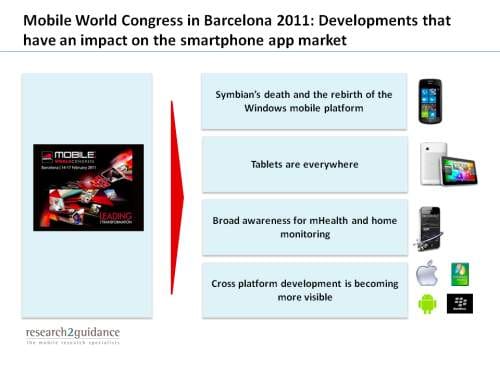 One final thing that could affect the app market is cross platform development, this will become much bigger in the coming years, and is seen as a way to not only save money but also pull each other’s resources in.

Knowing what will have the biggest influence on the app market is too early to know at this stage, but for now it comes down to many of the different factors mentioned above. Which do you think will have the most influence?