The surprise news of the day is that Manchester United are closing in on the transfer of 19 year old striker Anthony Martial from Monaco. In turn, that has immediately put FIFA 16 Ultimate Team players on alert on his potential rating in the upcoming game.

We say this, as right now he only has a rating of 69 in FIFA 15, a silver card which is obviously pretty underwhelming. Man United obviously sees potential in the young striker though and it is going to be very interesting seeing that rating rise throughout the FIFA 16 FUT season once he completes his move and earns himself some in-form cards.

Social media has ignited right now, with many admitting that they don’t even know who the player is and are shocked that he is arriving for as much as £36m – especially when missing out on Pedro to Chelsea for £22m. 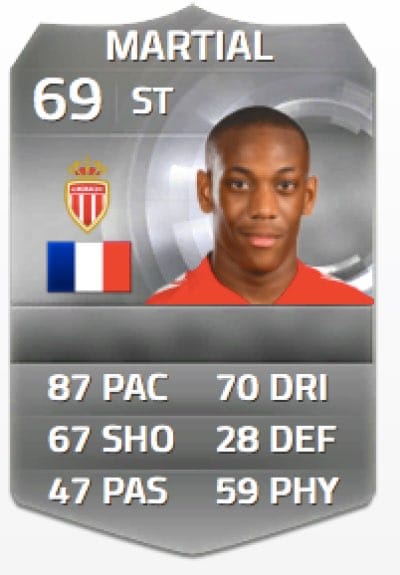 You can see Martial’s FIFA 15 FUT stats above, showing a 67 for shooting, 70 for dribble but a rather impressive 87 for Pace – a key ingredient when buying the fastest players on FIFA 16.

This BBC report suggests that the move is definitely on and is subject to a medical so FIFA fans should start preparing for his transfer to Manchester United on FIFA 15 and FIFA 16 in due course.

As a FIFA fan, are you a bit surprised about this signing? For those that have been using him on FIFA 15 constantly – do you rate him highly or not?

Put it this way, would you include Anthony Martial in your FIFA 16 squad builder or not?

Update: Here is the confirmed Anthony Martial rating on FIFA 16 – He is going to be a 77 which is a huge upgrade from his FIFA 15 card. 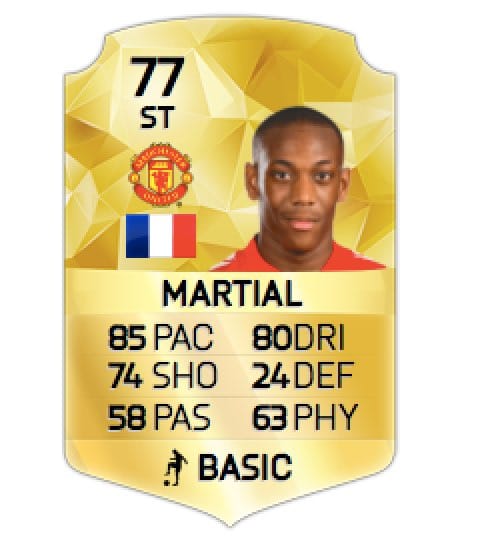