With Final Fantasy XIII being one of the most talked about games this week, it comes as no surprise that there are now a number of reviews of the game. One of the most recent suggests that the Xbox 360 version is better than the Sony PS3 that one is still up for debate though.

The new incarnation of the game comes with a host of changes to the series — previous version now pale in comparison, well that is what Examiner suggest in their review of the game. This is now the 13th title from the series and there is no slowdown in the story or characters — this does not happen often in a franchise. 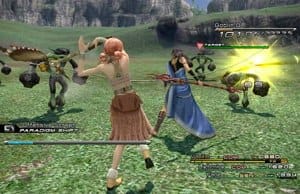 Some of the early reviews of Final Fantasy XIII did not have as much detailed information as fans had hoped, but Examiner have spent 55 hours playing the game on the PlayStation 3 so should be able to offer us more of an insight.

The Xbox 360 version is yet to be played by them — we are certain that they will do so very soon. Visit www.examiner.com now for a detailed review of Final Fantasy XIII.