Most of you may be growing tired of even more Angry Bird games releasing every so often, but there is slightly more interest in the next one, as none other than the Star Wars universe will be invading the Angry Birds in November.

We have the very first gameplay to show you from the upcoming crossover and it’s the first time we’ve seen actual footage of gameplay in action, rather than just cutscenes and various teasers that Rovio put out in the past. As expected, lightsabers are going to be involved and you’ll be able to use Luke Skywalker’s trusty lightsaber to cut through objects as you approach them.

Joining young Skywalker will be princess Leia and we see her trusty blaster gun being used to great affect to take out a stationary AT-AT that has managed to take up residence with the pigs on one of the many Star Wars themed maps. From what we can see, the Tatooine and Hoth environments are two of the confirmed maps in the game and you can see what they look like in the very short clip below. 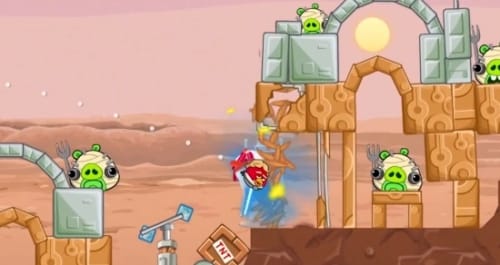 Hopefully Rovio will give us another teaser before November 8 as we’re sure that a lot of you need to see more gameplay before downloading first, a confirmation of how many levels will be included would be useful too. The one pleasing aspect about Angry Birds Star Wars, is that it is going to be available for download on iOS, Android, Windows and Mac at the same time – so no sign of any platform exclusivity which is great.

We fully expect there to be some unlockable Star Wars birds thrown in there too, as you just know, no Star Wars game is complete without the likes of Yoda and Chewbacca. We would like to think that Roxio has included them as hidden extras in the game, but we’ll just have to find out when the game goes live in just over a weeks time.

Will you be downloading Angry Birds Star Wars or not? Visit the official website here for some very cool artwork.