Are you a fan of the hugely popular Angry Birds game? If you are you’ll be pleased to know that Rovio Mobile has just revealed on their Twitter page that a brand new update called ‘Mine and Dine’ is on the way. What’s more is that the developer has also released a trailer for the upcoming update.

As you can probably guess by the title, the ‘Mine and Dine’ update will see the Angry Birds take the war against the pigs underground. According to Thomas Sharp over at gadgetsandgizmos.org, just like with other themed Angry Birds levels, the new update will feature new props and costumes.

Not only will some of the pigs come equipped with pickaxes and miners’ helmets, but the level will also feature wooden beams, loose boulders and the usual obstacles that players have to bash their way through. The teaser trailer (which can be seen below this post) also shows new objects such as jewels. 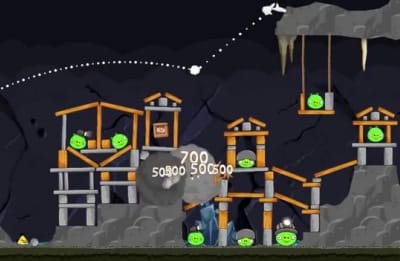 One scene shows a red jewel hanging in a box, which could well mean that players might get extra points for smashing the jewels. The upcoming update will be free to existing Angry Birds owners; while new players will be required to pay 59p for the ‘Mine and Dine’ update on iOS devices.

Rovio’s Twitter post said that the update has already been submitted to the Apple App Store for approval, so it should be arriving very soon. What do you think of the new update judging by the teaser trailer?