A few days ago we announced that the hugely popular Angry Birds Rio game was going to be receiving an update at some point next week. We unfortunately couldn’t provide any more details on the upcoming update at that stage, as Rovio Mobile hadn’t revealed any more information.

However, according to Danny Cox over on the examiner.com website, the developer has no decided to treat its fans to a trailer for the upcoming ‘Beach Volley’ episode. The new update may have delayed slightly, but judging by the trailer it looks like it is definitely worth the wait.

The ‘Beach Volley’ episode of Angry Birds Rio comes with monkeys, and what appear to be a helicopter, a ship and golden watermelons for players to find. Oh and it also features the side flying blue bird duo. The trailer simply has the Beach Volley episode’s release date as ‘Coming soon.’ 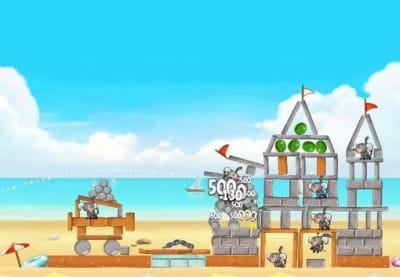 As we previously mentioned in our article here, once the latest update is released, Angry Birds fans will still have another three Angry Birds Rio updates to look forward to. The first of these will be arriving in July, while the other two are expected on or around October and November.

You can watch the trailer via the examiner.com website. Are you looking forward to the upcoming Beach Volley episode?