Rovio Mobile’s Angry Birds franchise appears to be dominating the world in every way. Not only has it become one of the most successful games on the Apple iPhone, iPod Touch and Android-based smartphones, but the Angry Birds plush toys appear to be just as popular.

According to Stuart Miles over at pocket-lint.com, fans from all across the world have already been able to get their hands on the five different plush toy birds from the Angry Birds game, and now it appears that Rovio Mobile is adding plush pigs to the collection. 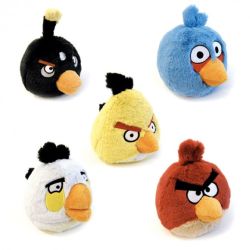 The pigs — which include the one with the cracked helmet, the one with the mustache, the king pig and just the standard pig — will be available from January 2011, and will cost fans $14.99 each. Rovio is happy to ship worldwide as well, so anyone will be able to purchase them.

Have you purchased or will you be purchasing any of the Angry Birds plush toys? If so, which ones? Do you play the Angry Birds game on your iPhone, iPod Touch or Android smartphone?