We have some really great news now, for those of you who own an Apple iPad and a copy of the Angry Birds HD game. Rovio Mobile has just released version 1.5.0 of the hugely popular puzzle app, which provides fans with another 15 exciting levels.

According to Paul Lamkin over at pocket-lint.com, the brand new levels appear in a new adventure called “Ham-Em High,” which has a bit of a Wild West style to it. Fans will finally get to see the arrival of the Mighty Eagle in the update, as well as having a new golden egg up for grabs. 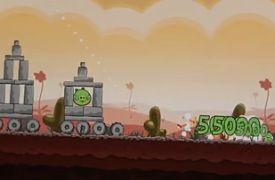 The Mighty Eagle — which is available as an in-app purchase for 59p — will help players out whenever they get stuck on a level. All you have to do is throw in a can of sardines, and along comes the Mighty Eagle to save you. However, you can only ask for the Mighty Eagle’s help once an hour.

You can read more about this app and download it if you haven’t already, over at itunes.apple.com. Angry Birds HD was named Pocket-Lint’s Best Game of 2010.