Well, just when we all thought that board games were the dinosaurs from which the gaming revolution evolved, the whole notion has now been turned on its head with Angry Birds! The sensation that began life as an IPod touch/ iPhone app, before being ported to various systems (and has been downloaded 50 million times over all systems), continues to grow; But against all odds is set to capture the traditional board gamers in what can only be described as ‘retro cool’ fashion.

At this point it only seems fair to point out that there isn’t actually a board with this game, but it is played with plastic elements on a table top, and is packed in a box, so apparently that puts it squarely in the board game category. 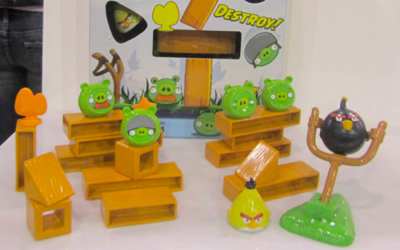 The board game was just unveiled by Mattel at CES, and will retail in May for $14.99 (approx £9 in UK). It will mimic the video game, but will allow for the tactile experience of actually catapulting little plastic birds (angry looking ones of course), at towers of little plastic pigs! Mattel have also drawn inspiration from the trading card/top trump phenomenon when putting this little gem together, as the game involves drawing cards to find out which tower to build before destroying it with an angry bird or two! If successful the points on the card are won.

The game has also just become available as a mini on the Playstation store for PS3 and PSP last Tuesday.

It seems ironic that in an age when video games are reaching levels that are becoming harder and harder to supersede, someone has the foresight (or hindsight maybe) to turn things on their head and put board games back on the map by utilizing the characters from the video games.

So what do you think? Will the board game make a comeback by using popular video game characters, or have we gone too far down the gaming track not to be bored by the board? You can see a hands-on with the new board game in the video below.