The Angry Birds 2 release date for Android and iOS is on July 30, 2015, but if you have a Windows Phone, then we are afraid there will be no support for a while. To not have this game released on the platform is a huge blow for users, one that has caused a great deal of anger.

Rovio was also asked if Angry Birds 2 for Windows 10 Mobile would be released, and the answer was not a positive one either, as there would be no release for the time being. I guess we should look at the bright side in all this, as the developer did not say it was never going to come, just they don’t have a timescale. 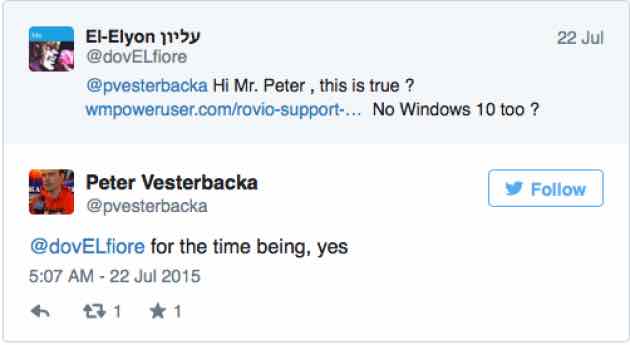 Many Windows Phone and upcoming Windows 10 Mobile users are annoyed that Rovio has put all its effort into supporting Android and iOS and has forgotten about the third platform. Although, we are sure that people with an Android device or an iPhone, iPad and iPod touch are happy that the developer has put more effort into their platforms.

It’s no secret that as a platform, Windows Phone is not very popular and only has a small user base when compared to the big two. However, how is a platform meant to expend when it has limited support for such popular apps?

Having said that, we have to wonder how many people really play Angry Birds now anyway? We are just not certain how popular Angry Birds 2 will be now, seeing as more people play games such as Clash of Clans and are too busy on Instagram and Snapchat