Most technology blogs are running articles comparing the differences between iOS 6 and Android 4.1 Jelly Bean, which basically list the features from each of these upcoming software platforms and let you decide the better platform for your next phone. The feedback we’ve seen so far shows that most users find this unhelpful, and one of the funniest comments along these lines said, “This is as useful as single layer toilet paper“.

If you want to look at Jelly Bean vs. iOS 6 based on features then we recommend you just visit the official pages, which are easy to find by going directly to the iOS 6 preview page found here, and also the developer page for Android 4.1 found here. This will provide you with most features and would likely provide more detail than most comparisons on technology blogs.

Those of our readers that want to sit back and have the tweaks in Android 4.1 explained to them could do this with some videos, which two of the best for Jelly Bean and iOS 6 are seen below this article. The first gives you a full walkthrough of Android 4.1 on the Galaxy Nexus, and the second shows around 40 minutes of iOS 6 features being explained at WWDC.

The links above and the videos below should give you enough to understand exactly what Google and Apple are trying to do with the newer software in 2012, although everyone would have a different opinion on what OS is better even after reading the same information. There are a number of people that have already decided on the OS they prefer, and if that’s Android then it’s just a matter of the phone to choose. 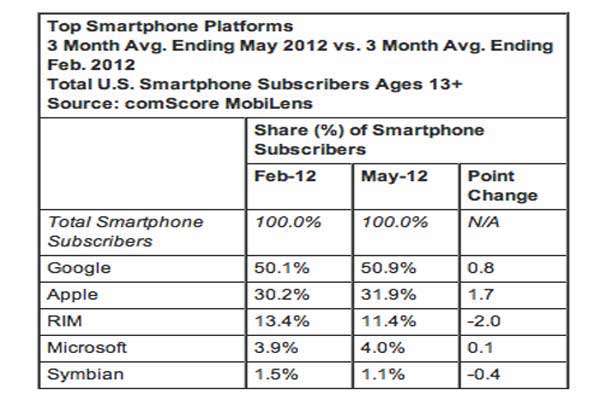 One iPhone blog points out a recent ComScore report, which shows iOS growing 1.7% in the 3 months that ended May this year, and the report also shows Android growing just 0.8% in the same time. You can see an image above showing the findings of this report.

There could be a number of reasons why Android’s growth is less than iOS in the 3 months up to May, which could include problems some people report getting the latest update on their handset, which could lead to users wanting an OS that offers easier access to the latest updates. Then of course you have how open Android is and some users would never want to move to iOS, which is a much more closed system, although this in itself is also a form of better security. We’re sure you have your own opinion on the upcoming software from Google and Apple, so feel free to share a comment below.

We would predict that iOS 6 is likely to cement Apple’s growth, and you could see many more “Apple fanboys” being created around the world. Apple is likely to continue attracting people to buy more than one Apple product, and make their life easier through software and having a house full of Apple products. The next 3 months will be interesting and if we continue to see iOS growth that doubles Android over the course of 2012, then Android could be heading towards stagnation.

One iPhone owner said this to us recently “I bought my first iPhone 5 generations ago, and have purchased every iPhone since. Over the years my house has slowly filled up with several Apple TV’s, MacBook Air’s, iPad’s, an iMac, and now we also look forward to the day a full Apple HDTV is launched.” How many homes have this commitment to Google products? There seems to be a loyalty to Apple not found with many other brands.