Fresh after officially announcing the Samsung Nexus S to the world, Google’s Andy Rubin has delivered another bombsell, showing off an early look at Android OS Honeycomb, the next version to release after Gingerbread.

Let’s get the juicy information out of the way first. When speaking at the D: Dive Into Mobile event at All Things Digital, Rubin surprised everyone by showing off Honeycomb for the very first time running on a prototype Motorola Tablet – which we believe to be the Stingray.

Rubin confirmed that Honeycomb will release in 2011, and that it will have support for Tablet devices, we’re guessing this Motorola prototype will be one of the Honeycomb launch devices. We’re still waiting for further information on the new OS, but we do have a screenshot to show you courtesy of Engadget. 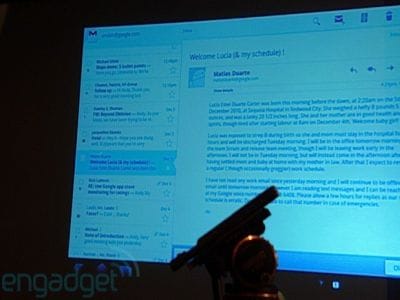 It doesn’t show much though sadly, just what the Gmail interface looks like on Honeycomb, complete with the various icons located at the top right-hand side of the tablet. We’ll update this when we get more info – for now though, what are your early impressions of Honeycomb?

It will be interesting to see when Honeycomb actually launches, given that we’ve only just heard about Gingerbread. There was a pretty big gap between the releases of Android 2.1 Eclair and Android 2.2 Froyo, but it looks like Gingerbread and Honeycomb are going to become the best of friends rather quickly – don’t forget Honeycomb is looking to be more of a tablet-specific OS, rather than a smartphone OS.