Looks like some Android smartphone owners got a little more than they expected when their devices were updated with Ice Cream Sandwich recently. The update has been rolling out across many Android devices as promised. Reports are suggesting that when those owners of the ASUS Transformer Prime got their update, they found a new ‘Experiments’ feature hidden within their updated Gmail app.

While it is generally thought that if something hints that it is experimental it is a bad thing, apparently in this case it is great. The new function allows for a couple of optional functions to be activated with Gmail that users wouldn’t normally have. One of the new features enables users to drag-and —drop contact chips, which are basically moveable contact tiles inside the app, making it a lot easier and more practical to use, while the other feature allows for a broader and deeper text search within emails by indexing the message text.

Although neither of the features is particularly special, they are extra options that some people may find helpful, especially those that use Gmail a lot. It is worth noting that the ICS update does not bring the new version of Gmail to all handsets however, with reports suggesting that owners of the Galaxy Nexus were left with the old version when their update was received.

If you are interested in having the new features from the latest Gmail version it can be downloaded separately by clicking this link. It may not work on all handsets so if this is the case for simply uninstall the app and download the original version again. Check out the article at AndroidPolice, who were able to download the updated version of Gmail successfully, for more details.

Do you have the latest version of Gmail on your ICS device? 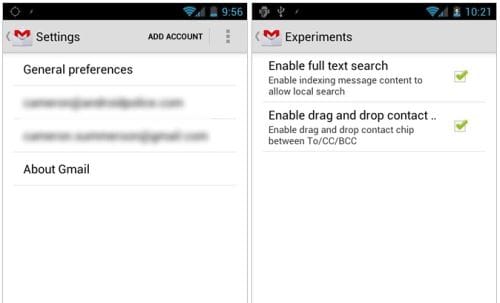