We have some pretty good news to bring you now, especially if you are an Android fan and are looking forward to the release of OS 2.3 Gingerbread. An update to the existing Google Maps App for Android has revealed some rather exciting features that you need to be aware of.

As picked up by Phandroid, the new Google Maps update will now actually allow you to have a sneak peek at how the Google Maps UI will look in the forthcoming Gingerbread update.

Basically if you head into the Google Maps APK section, you’ll be able to see a brand new interface – Gingerbread! Check out the included image below to see the changes between the two different versions of Android. Observations by Phandroid include a new blacked out design for the Layers menu compared to the transparent one on Froyo, and also the new squared-off ‘Clear Map’ and ‘More Layer’ boxes on Gingerbread, rather than the rounded design on Froyo. 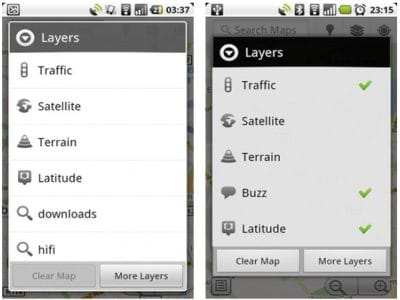 Check it out on the new Google Maps App now and let us know your thoughts on this. Do these small changes look better already? A taste of things to come for sure.