As the battle for supremacy of the smartphone market between Android and iOS continues, Google’s OS looks to be getting even stronger. Having already increased their market share of handsets sold over the last year by 8%, Android apps now look to overtake those that are downloaded for the Apple iOS. In fact analysts insist that the number of Android apps downloaded by the end of 2011 will have risen by almost 7 billion.

The prediction comes from an analyst firm known as Ovum who says ‘Android will take a significant lead with 8.1 billion downloads to Apple’s 6 billion before the end of the year.’ last year was a different story, with Apple dominating 2.7 billion apps downloaded compared to Android’s 1.4 billion. The basis for these predictions comes from the growth of the Android as a platform, due to its increasing popularity and integration into lower priced handsets.

Despite the prediction, the analysts believe Apple’s iPhone will still continue dominating the market in terms of revenue from number of paid-for apps downloaded as opposed to Android devices which will lead in the overall amount of apps downloaded. They predict that by 2016 Apple revenue totals for these paid-for apps will have reached $2.86 billion as opposed to $1.5 billion for Android’s total.

According to ITPro, Android’s growth will be furthermore enhanced as the market is set to explode this year anyway, increasing by 144% from 2010’s total. Also downloading and purchasing apps on their devices has just become even easier, as users will no longer have to undergo the tedious process of typing in card details every time they wish to purchase an app, as they are now charged via their phone bill thanks to Vodafone.

Do you agree with the analysts’ predictions? Which OS do you prefer? 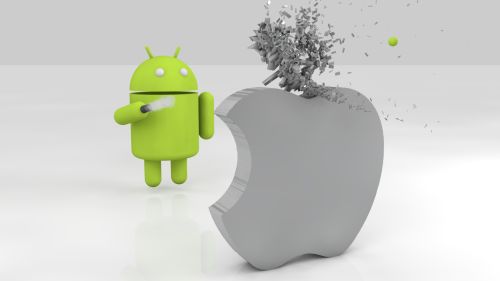